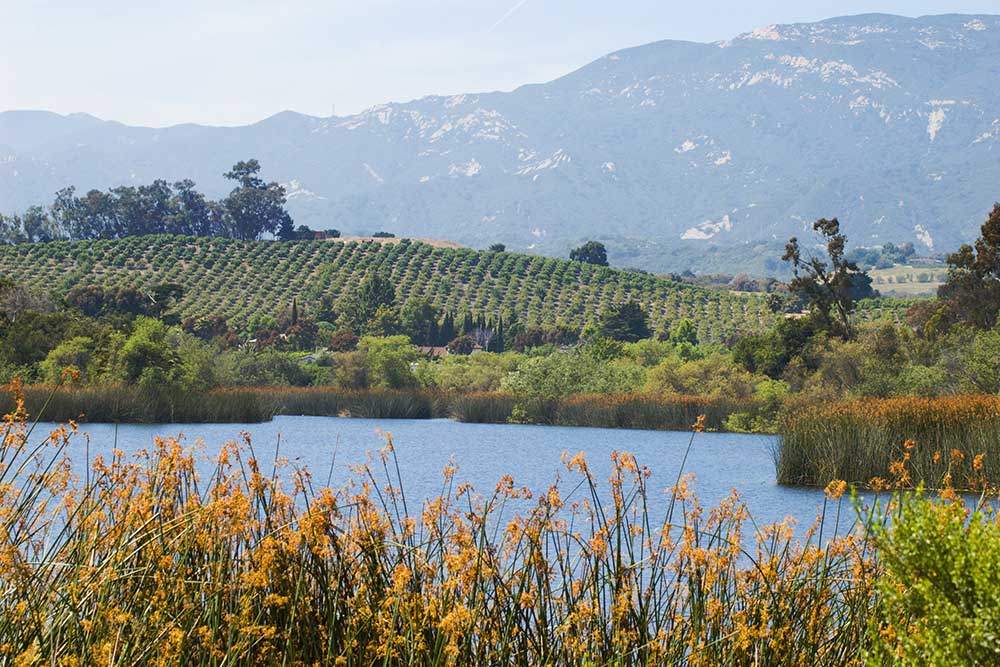 Goleta, adjacent to University of California at Santa Barbara (UCSB) and home to the Santa Barbara Municipal Airport, hugs the coast about 12 miles west of Santa Barbara. The Spaniards initially named the place “The Good Land”, but the official name changed to Goleta after a schooner with the same moniker arrived here in 1822.

The Goleta Valley was a prominent lemon-growing region during the late 19th and early 20th centuries, and was largely agricultural. Several areas, especially the Ellwood Mesa, were developed for oil and natural gas extraction. In the 1920s, aviation pioneers started using portions of the Goleta Slough that had silted-in due to agriculture to land and takeoff.

Later residents supported the construction of Lake Cachuma, which provided water, enabling a housing boom and the establishment of research and aerospace firms in the area. In 1954, the University of California, Santa Barbara moved to part of a former Marine base. Along with the boom in aerospace, the character changed from rural-agricultural to high-tech. Goleta remains a center for high-tech firms, and a bedroom community for neighboring Santa Barbara.
Food & Agriculture (sub)

Sniff. Is that the scent of lemon you detect wafting through the air? Yep. Lemon orchards once dominated the landscape; they’re still here, and Goleta celebrates those lemons in a big way during the California Lemon Festival in October. Lemons aren’t the only produce that’s fêted in Goleta. A cornucopia of culinary delights is harvested from Goleta’s fertile farms and sustainable gardens and served up in area restaurants and local farmers’ markets year round. Wash it all down with locally brewed beers at Hollister Brewing Company, a big player in Santa Barbara’s burgeoning microbrew scene.
Land Use (sub)

Goleta contains a mix of land uses, lacking only heavy industrial zones. North of the US Route 101 freeway is a region of predominantly tract housing built between the late 1950s and the 1970s, intermingled with newer condominium developments, a few gated communities, and adjacent to a lower-density residential zone in the lower foothills of the Santa Ynez Mountains which contains larger homes.

A commercial strip along Calle Real is one of the town’s several business districts. South of the freeway is Old Town Goleta, centered on the stretch of Hollister Avenue between Fairview Avenue and the Highway 217 overpass; adjacent to this commercial area is a region of older, and occasionally substandard housing; some of the south county’s least affluent people live in this zone.

Between Old Town Goleta and the airport, and running along south Fairview Avenue, are some light industrial zones, some of relatively few in southern Santa Barbara County. Farther west, near the intersection of Storke Road and Hollister Avenue, is a large shopping mall, including “big box” stores, which draws business from outside the local area.

There are also several business parks including Cabrillo Business Park, Fairview Business Center and the area along Castilian Drive. Adjacent to the mall and extending more than a mile to the west is a residential area, most of the housing in which dates back to the 1960s; it includes some high-density apartment blocks which accept some of the overflow student population from nearby UCSB.

Goleta has several significant parks, including Stow Park, Lake Los Carneros, and the Coronado Butterfly Preserve providing street access to the Ellwood Mesa Open Space on the bluffs overlooking the Pacific Ocean with beach access from UCSB. Goleta Beach County Park is just outside of the city limits.